Home Solar Rebate What is the solar stc?

What Is the Solar STC?

Australia’s Small-scale Technology Certificates (STC’s) is a Renewable Energy Scheme that makes solar energy affordable for everyone. With the STC scheme, you can save up to 40% off the price of your solar installation. 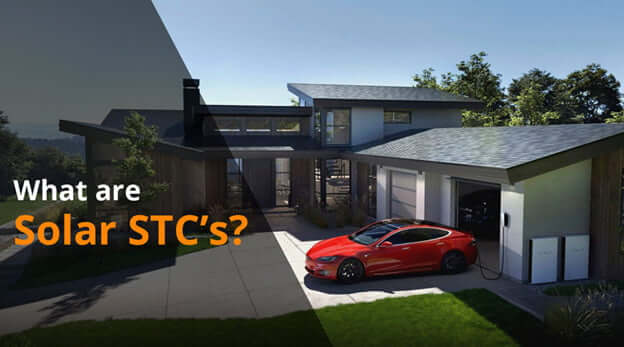 How does it work?

Certificates are given based on your location in Australia (zones based on postcode) and the size of the solar system you intend to install.

For example: If you live in NSW (Zone 2) and you wanted to install a 5kWh rooftop system, you would be legible to receive 62 STC’s which can be traded for $38.50 each (current price of certificates) totaling $2,387.

Here is a list of STC’s for NSW by system size.

What Is the Current STC Value?

The STC represents a monetary price in Australian dollars which fluctuates between $32 – $40 each. This is basically the price of carbon as big polluters are required by a certain number of certificates each year depending on their pollution output.

This is designed to offset their carbon while making it easier and cheaper for homeowners to install a solar system and save on their power bills.

The current STC value, according to Greenmarkets, is $38.50 based on the latest reported market data. Think of the STC values like a stock price that keeps on changing depending on the many demand and supply related dynamics.

How Many STC Is A 5kw System?

For this category of buyers, small-scale certificates are issued based on the zone they are in and the value in Kilowatts of the solar kit they purchase.

For instance, buyers purchasing a 5kw solar system in Perth would receive about 62 STCs worth anything from $35 going up, depending on current demand and supply. Using the above estimates as an example, your total STC discount could be worth $2660 in real money.

However, the number of STCs you get may depend on other variables and data, as determined by the Australian Clean Energy Regulator. Going by the regulator’s REC registry, such variables may include things like:

To get an estimate of how many STCs you can receive for a 5kw system, head over to the STC calculator hosted on the Clean Energy Regulator’s website.  You will be required to fill in a few details about the solar installation you intend to purchase to get an estimate of STCs for the same.

How Can I Claim the Solar STC?

Most solar vendors will either provide an easy application process or factor the discounts into the solar kit. For example, if you were to purchase, say a 5kw solar kit, the STCs may help you cut the cost from about $11,000 to around $7,000 with everything included, including installation and equipment.

STCs commonly referred to as solar rebates, is, in essence, a PPP initiative meant to make green energy more appealing to Aussie homeowners.  You will not receive direct monetary disbursals from the Australian government or the Clean Energy Authority through the STC framework. However, they will make purchasing a solar product much easier and affordable. In comparison with neighboring countries such as New Zealand, solar products in Australia are quite attractive, thanks to STCs.

That said, you can also choose to create tradable small-scale certificates on your own and forego the upfront rebate/ discount from the solar vendor or agent during purchase. Going this route involves creating an account at the STC clearing house within a year of the solar installation being done.  This process often takes a bit of time and requires multiple steps plus paperwork to complete

Is the STC And the Solar Rebate the Same Thing?

In essence, the Australian solar rebate is the same thing as the STC only that one of them is a broad reference while the other is the real thing. Think of the STCs as a vehicle through which the green energy rebates are delivered to the consumer. Diving deep into the solar rebate system, you will see how, using STCs, the government incentivizes private energy entities to make the rebate system work without direct funding.

Industry insiders tend to shy away from using the term rebate as the government doesn’t necessarily disburse any funds to consumers.  However, terming rebates as STCs has become the norm and widely accepted in the general population. In truth, STCs can be a bit confusing to most people hence the reason why there are best handled from the agent/vendor side and offered as a point of sale discount.

To know how many STCs you can receive for your solar installation., you will need to submit your postal code or zone number to the solar agent or the Clean Energy Authority. This is because the STC system is demarcated into four zones based on solar radiation levels and other factors.

The four zones are as follows:

Zone 1- This zone consists of postcodes from cities and localities in the Northern territory such as Darwin, Townsville, Rockhampton, The Gardens, Parap, Stuart Park, among others.

Zone 2- Zone 2 consists of postcodes from localities in the Australian outback such as Alice Springs, Daly Waters, among others.

Zone 3- This zone consists of postcodes from major cities and localities to the west, south, and lower eastern parts of Australia such as Perth, Adelaide, Canberra, Sydney, Brisbane, among others.

Zone 4– The last zone with the least number of STCs per Kilowatts is at the southern tip and surrounding areas such as Melbourne and Perth. Below is a map showing all the four zones with major cities and localities, as published by the Clean Energy Authority.

Keep in mind that this zoning system is not an exact science. For instance, some homeowners with neighboring properties may receive different STCs, especially if they are at the border zones. If you are not sure of the zone you are in, try and search with a postcode or talk to your solar installer.

Using the current STC calculation method, zones with a lower number (e.g., zone 1 and 2) will have higher STCs per kilowatt than the others as expected due to solar radiation disparities in these areas as shown in the table below:

For a more detailed breakdown of STCs based on postcodes and zones, you can download the Clean Energy Regulators documentation on the same. 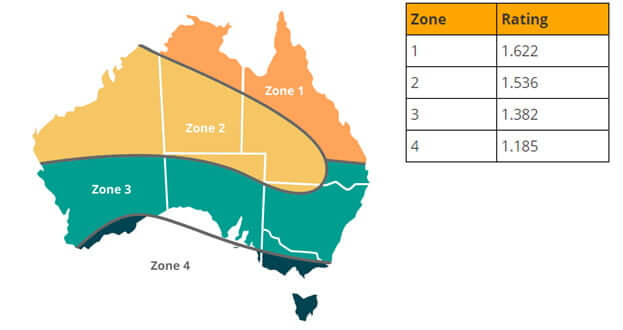 What Is the Max Size System to Apply for STC’s?

To be eligible for a small-scale technology certificate, your solar system must not exceed 100Kws. Anything above that will be categorized under the large-scale category with a different incentive system.  Any solar system size below 100kw will be eligible for a number of STCs according to the respective rated power outputs and other factors (zone, deeming periods).

Does the STC Include Solar Batteries?

Sadly, additional solar battery storage systems are not eligible for the STC scheme and will not be included in the rebates. That said, the Clean Energy Authority does specify some solar products with integrated batteries that can be included in the scheme. Any additional batteries will not be covered under the program and you will shoulder the full cost. Perhaps this explains why solar battery systems are quite expensive in Australia, even when solar products are becoming more affordable.

Any residency, be it a caravan or permanent home, could be considered for the STC scheme. You will, however, need to provide an address and prove of ownership of the caravan or mobile home to be eligible. The application can be made from any of the zones demarcated under the STC zoning system.

When Does the STC Scheme End?

The STC scheme is set to come to be wound down by the year 2030 as per the Small-scale Renewable Energy Scheme timelines. This why the deeming periods are calculated with reference to the number of years between now and 2030 with the number of certificates being created reducing every year as demonstrated in the Melbourne example below. 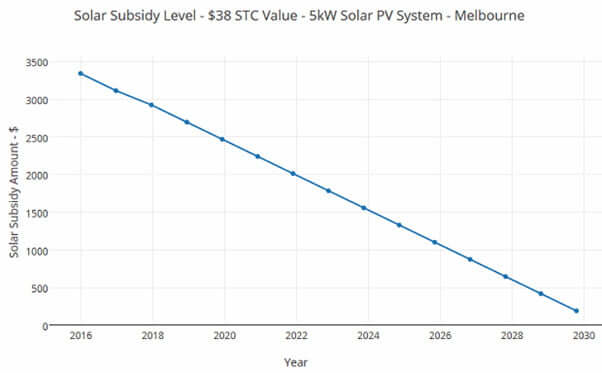