Trina solar panel efficiency, warranty, and value for money ratings hold up well when compared to other brands like REC and Jinko. However, the panels are quite expensive, which is why we gave it a 7.5/10 rating on cost.

The company manufactures quality mono, multi and bifacial solar panels with up to 600W power output and efficiencies of over 21.0%. This Trina solar panels review will help you find the right solar panel for your needs.

How much do Trina Solar Panels cost?

Are you looking for quality solar power with a high power output? Trina solar provides one of the best solar panels in the Australian market at an affordable price. Here is the average cost of the panels, fully installed. The prices include:

Note: The actual prices vary depending on location, the solar installer you choose, and the preferred inverter brand.

How are Trina Solar panels better or worse than their competitors

Trina solar panels are popular in Australia because of their quality, performance, and reliability. The company offers warranties that meet and exceed the industry standard, and their panel’s output and efficiency are much higher than most brands.

The panels, however, have a high degradation rate which may be a turnoff to some customers.

Does Trina Have Any Credits/Awards To Back Them Up?

Trina Solar has several awards and certificates that increase its visibility in the market. These include:

Does Trina have an Australian office?

Yes. Trina Solar has offices and call centers in more than 21 cities around the world. Its main office in Australia is based in Sidney. The company has also forged partnerships with several universities, which are crucial in its research and development program.

After purchasing and installing your solar panels, one of the biggest worries for Australian homeowners is whether the company will be in the market long enough to fulfill its warranties.

Having an office in the country makes it easier for the homeowners to contact the support team when they need help and assurance that the company will be in operation for a long time.

Trina Solar is one of the biggest solar panel manufacturers in the world. Founded in 1997 in Changzhou, China, this company scaled the international markets quickly, and in 2006, it was listed on the New York Stock Exchange. In 2008, it was ISO 14001- certified. In 2020, the company became publicly listed on the Shanghai Stock Exchange.

As of October 2020, the company had already delivered over 56GW of solar panels globally, making it to the top 5 global solar panel suppliers for the fifth time in a row.

This Chinese company has set 20 world records for its modules’ power output and silicon cell efficiency since 2011. The company also has more than 800 approved patents. This shows Trina is a leading solar energy manufacturer with a good track record.

The company is now part of the Silicon Module super league – a group comprising the six biggest solar panel suppliers in the world PV market.
Besides their Chinese manufacturing capacity, Trina Solar has plants in Vietnam and Thailand.

Yes! Trina solar panels are among the most efficient and cost-effective panels you can have on your roof. The panels are designed to withstand adverse weather conditions, including heavy snow and wind loads, and are resistant to salt erosion.

With some of their latest panel models expected to attain outputs of up to 600W, Trina panels also make it easier for homes with small roofs to enjoy max solar power.

Trina’s TALLMAX series solar panels have been long-time market favorites because of their efficiency, reliability, and performance. These solar panels were designed for large utility-scale projects and industries due to their high power density. 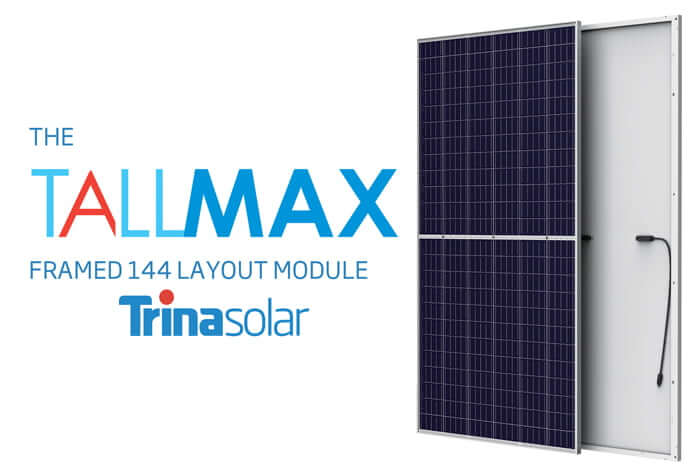 Trina solar uses split-cell technology in their production, where they replace all their full cells with half-cut solar cells. The two half-cell pieces are then arranged in a series formation. This helps reduce the power loss due to ribbon resistance to just a ¼ of that in full cells and improves their efficiency by 2%.

This technology also comes with a string cell design that ensures every cell string works independently. The cell design is excellent at reducing the impacts of module shading and overall power loss.

Trina Solar’s emphasis on cell efficiency ensures that their panels’ output is at least 90% of its initial output after the first 10 years and around 80% after 25 years. After the first year, its degradation rate stands at 0.5% annually.

The high efficiency and power output of Trina Solar panels means that homes don’t need many panels on the roof. For a 6.6kW solar system, you’ll only need between 15-19 solar panels, depending on the model you choose.

The Honey Series is the most popular from Trina Solar, offering a combination of performance, quality, and value for money. The panel is available in both monocrystalline and multicrystalline cells with 120 half-cut cells, perfect for small rooftops.

The new Honey Black panel has an aesthetically appealing all-black color ideal for visible rooftops, but it comes at an additional cost. 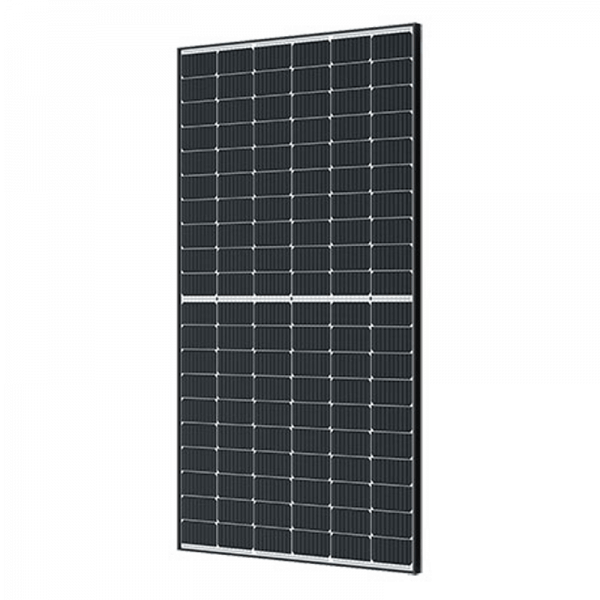 The Honey Series uses half-cut cells and MBB (9 busbars) technology to lower internal resistance by shortening the current conduction distance by 50%. The busbars are finer and narrower to reflect more sunlight from the ribbon to the cell, increasing efficiency.

The half-cut cells with a unique circuit design also reduce the cells’ power loss by to ¼. This reduces electrical resistance within the ribbon and improves overall panel efficiency by 0.6%.

The Honey Series guarantees you a 98% initial efficiency and experience a 2% first-year degradation. After 10 years, the efficiency stands at 90% and goes down to 84.8% by the 25th year.

This series comes with a 15-year product workmanship warranty and a 25-year power warranty. This is way better compared to what most solar panel manufacturers offer.

The maximum power output for the Trina Honey M series is 385W under optimal conditions, with a module efficiency of 21.0%.

Due to the panel’s high efficiency, you will need about 12 panels for your 5kW solar system. The solar panel is ultra-thin and lightweight, making it ideal for smaller rooftop systems.

The DUOMAX Twin Series feature Trina’s Bifacial technology that allows the panels to convert electricity from the light that strikes both sides of the panel modules. 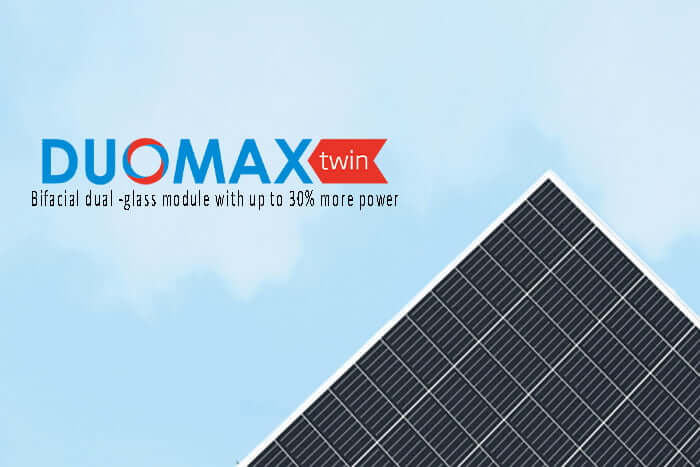 The dual glass tech increases the electricity generation of the panels by up to 25%, and the MBB technology reduces the conduction distance of the current by nearly 50%. This helps reduce the internal ribbon resistance by almost 15%.

It also increases the energy efficiency of the panels by minimizing microcracks.

After 10 years, you can still expect an output efficiency of 91% or higher, and at least an 83% power output performance of the panels’ initial performance after 30 years.

Dual MAX solar panels are the ideal panels for structures with limited roof space as they are designed to maximize power output. For a 5kW solar system, you might only need around 12 – 14 of these panels.

Trina’s Vertex solar panels are by far the best in power output, efficiency, and general performance. The series boasts of the 500 – 600 W high-power modules that are projected to be the future for Trina Solar. 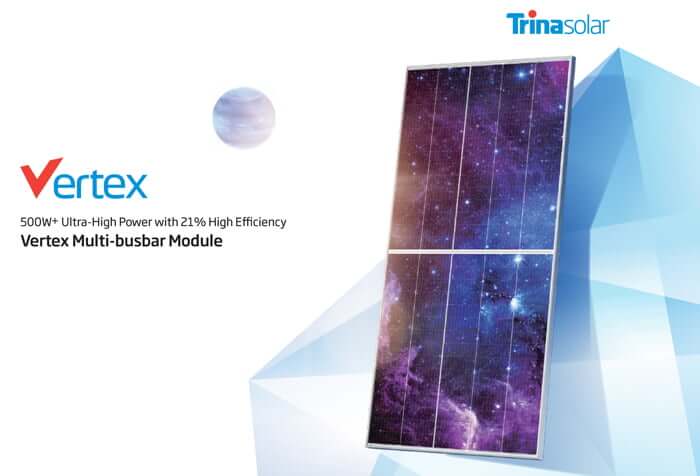 The Vertex Prime solar panels adopt Trina’s game-changing multi-busbar technology alongside the 210mm side wafer, non-destructive cutting, and the high-density interconnected tech to achieve a high 600W output and up to a 21.4% efficiency. This new cell string setup also helps in reducing the BOS (Balance of system) costs.

The panels also use the double glass ‘bifacial’ technology that maximizes power generation by almost 30%.

The use of 1/3 cut solar cells instead of the half-cut solar has also proven to be critical in reducing power losses and increasing the power generated per watt.

After 10 years, the panels generate around 92% of their initial power output, and after 25 years, the efficiency goes slightly lower to 84 – 85%. The panels have a slow degeneration rate which is great as it ensures your solar panels last longer and pays back faster.

For a 10kW solar system, you’ll only need 16 Vertex solar modules to get the most of your system. But due to the high output of each solar module, these panels are suitable for solar farms and large-land solar installations.

Trina Solar has been in the solar industry for over two decades offering solar energy solutions to homeowners, businesses, and industries. The company’s solar panel quality is unmatched as they use multiple technologies (split-cell, MBB, double-glass & bifacial) during their manufacturing process. Most Trina solar panels have module efficiencies ranging from 19% – 21% and impressive power outputs of up to 600W.

In February 2019, Trina Solar established an R&D Center Of New Energy IoT. Later in March 2021, they introduced their new 670W Vertex module that achieves an efficiency of up to 21.6%. This module inherits the 210 key technologies and is the most powerful and efficient Trina solar panel.

Trina has invested in innovation and technology geared towards improving their panel’s efficiency and quality. This has enabled them to break the world record on solar module power and efficiency nearly 30 times!

Trina also strives to provide the right balance between modern cell technologies and cost-effectiveness, making their prices much cheaper than other brands out there.

Trina panels are among the most popular Tier 1 panels in the markets, as recognized by the Bloomberg New Energy Finance Corporation.

Trina stands out from the crowd of large Chinese manufacturers and continues to soar higher every year. Their panels offer incredible performance, and their warranties assure you of reliability. If you are looking for additional power generation, Trina panels are an excellent choice.